First part of the travelogue is here: http://nilanjanray.in/kanha-tadoba-3000-km-roadtrip-part-1/

After Kanha, I left for Tadoba. Kisli to Nagpur was a relaxing drive (Khatia – Seoni – Pench – Nagpur). Picked up my old school friend from Nagpur airport, and proceeded towards Kolara, a Northern gate in Tadoba. We were staying in Svasara, a very nice resort in Kolara. It was around 47 degrees C when we reached Tadoba. Got the camera ready, had quick lunch, and was ready for the first safari. Had to dress up like daakus of Chambal – bandana, hat, sunglass – with only the tip of the nose peeping out.

We didn’t see any sign of a big cat, it was too hot. Saw a hare, and a few birds near Tadoba lake. Before coming back, we encountered a pack of wild dogs near Panderpauni. They were far away, but they entertained us with their antics. Going back to the chilled ac room was a pleasure. Rested for a while, had dinner, chatted with the other guests, and crashed.

Next morning was uneventful, apart from a leopard encounter. We had roamed around without seeing any big cat or fresh spoor. When passing abandoned cages near Tadoba Lake (once upon a time those cages were used to raise crocodiles), we saw that a few vehicles had stopped. Apparently a leopard was around. A langur sentry was giving his alarm call. From his excitement, it was apparent that he could see the leopard, which seemed to be in the undergrowth behind the cages. After 5 minutes, there was a snarl, a movement in the bushes, and a glimpse of a tail as the leopard jumped the cage fence and fled. It had been inside one of the cages all this while (perhaps couldn’t figure out how to get out), without any of us seeing it. Went back disappointed. We were supposed to do 4 safaris, we had already done 2 without seeing stripes. 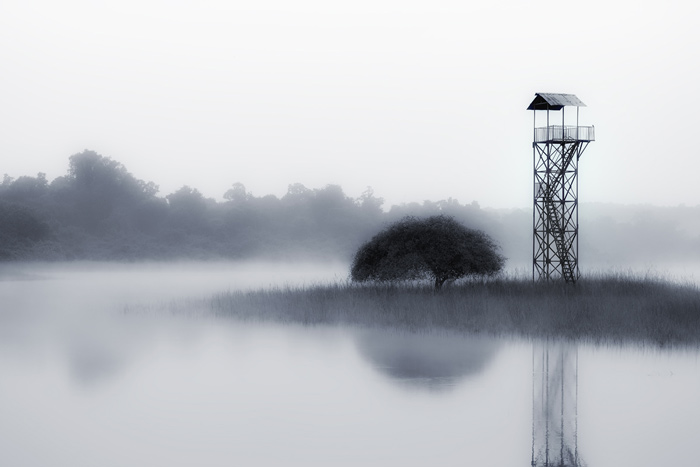 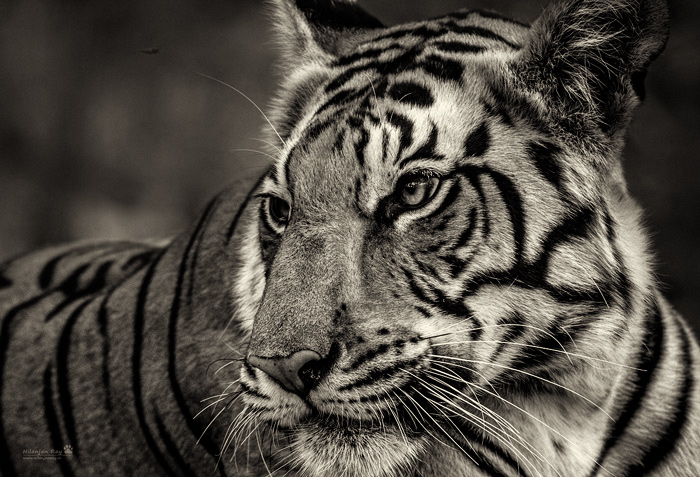 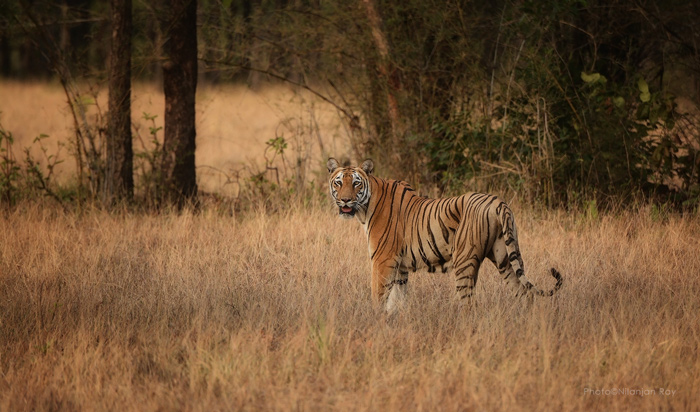 The afternoon safari was in Kolsa zone, through Pangdi gate, about an hour’s drive from Kolara. On the way, one of the resort vehicles had a flat tyre. So all the guests had to stand in burning heat for 15 minutes while the tyre was fixed. Very few vehicles entered the park through Pangdi gate, mainly due to its remoteness. After traveling for a few km, we saw a couple of vehicles were waiting in front of large thicket, say around 50 feet x 40 feet. The guides said that a tigress and her cubs were inside.

My fatigue vanished. Looked through the lens at full zoom, and could discern some movement. A twitch of an ear, a few stripes…it was the tigress. It was too hot for the cats to come out, so we waited for almost an hour. One of the cubs emerged for a few seconds, before going back inside. After it became a bit cooler, and the tiger family decided to come out. But on the other side of the thicket. We had anticipated this, and had moved our vehicle there the moment the tigress had got up. We were patiently waiting for the cats to settle down outside, in the shade, when a Maruti 800 (private vehicles were allowed in Tadoba that time) came roaring down the road. It went off the track to get a better position, and screeched to a halt. Idiot! The tigers got scared and went back inside the thicket. Someone whistled from far away – the cats had decided to travel cross country, and had gone away in a certain direction. Such a pity. If only that Maruti had formed one line like the rest of the vehicles! I would have captured the tigress and cubs playing together in the open. And after 15 minutes, the light would have been amazing!

There were two vehicles from the resort. After some discussion, we decided to take a chance and head towards another waterhole, a few kilometers away. We went on a broken track with jutting rocks, so the non-4WD vehicles couldn’t follow us. The plan was to wait quietly near the waterhole, hoping that the tiger family would eventually arrive for a late afternoon drink. 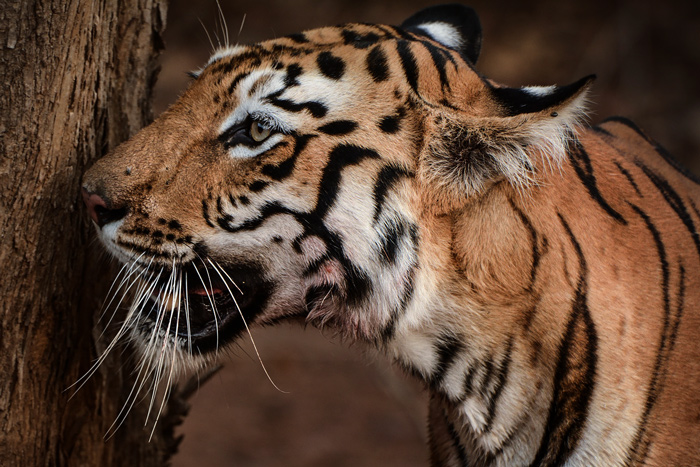 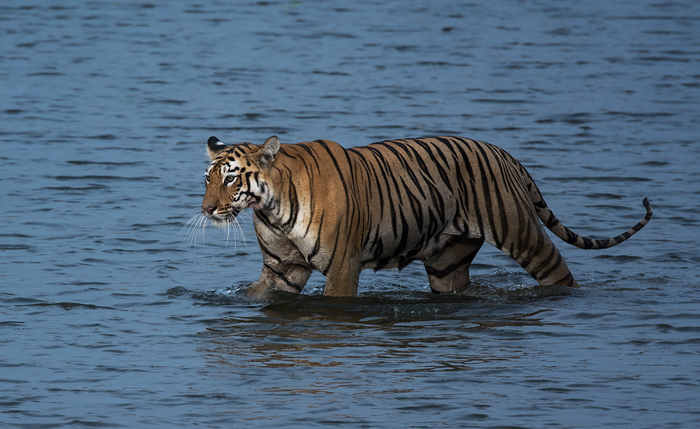 It was 4-5 km by road (the trail), but perhaps 2 km cross-country for the tigers. We positioned the two vehicles on two sides of the water body, so that we would have a good field of view, between us. Waited for half an hour. Then our ears pricked up. We could hear the alarm call of the spotted deers. The peafowl started calling too. With mounting excitement, we waited for the tigers to emerge. Unfortunately, the nearby gaurs decided to play spoilsport. They started snorting and giving their own alarm calls. Looking at them, we could make out that the tigers were within a few hundred metres. But then these bovines decided enough was enough. Just when I could see the tigress through the trees – some 300m away – a few large gaurs charged towards her and her cubs. The tigers fled!

We waited there for 10 more minutes, hoping that the tigers would come out again. But no such luck. We then decided to go down the trail for 500m and wait. The other vehicle decided to stay put.

We drove off. After a few hundred metres, there was a sharp turn. After we turned (and lost sight of the other Gypsy), our guide told the driver to stop. He had seen something. It was the tigress!

The driver stopped the engine. There was no way we could inform the other guests without spooking the cats. After a few minutes the mother came out. Then the cubs. They walked on the path for a while and then crossed some open ground. They were not close, but I could get a few tigerscape shots. The light was bad – evening was approaching – but you are grateful for what you get at such moments.

The other guests were envious after we told them about what had happened. But that is how the cards are dealt in the forest.

It got dark when we left the gate. On the way back, the vehicle in front braked hard. A huge leopard had been standing beside the road – it jumped back into the forest when the vehicle stopped.

The return drive was tough. I must have swallowed an extra kilo of dust. Anyway, a hot shower (cold water became hot in that heat) and some time in the cool ac room helped in recovering. 8 hours of open top gypsy safari – in that kind of heat – can be taxing. But it is amazing how adaptable a human body is. After a day, one gets used to 45-48 degree C. Or sub-zero temperatures, for that matter. 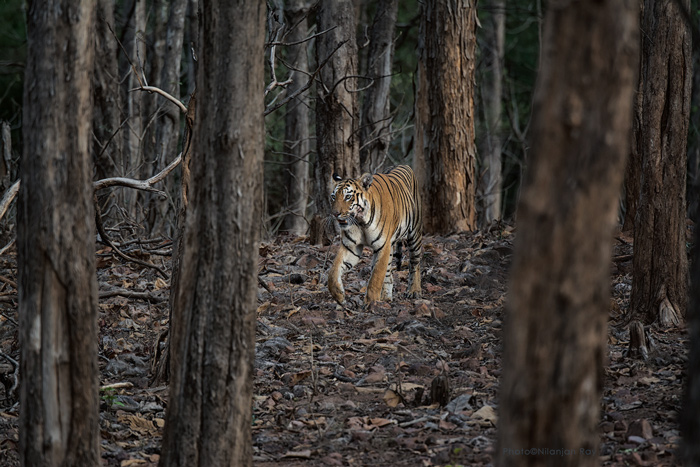 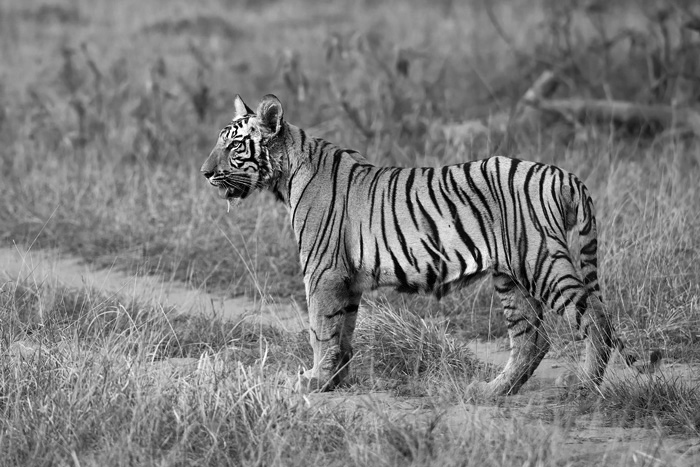 The fourth and last safari in Tadoba. This time we decided to head straight towards Tadoba lake, without taking a longer route. We were shooting honey buzzards beside the lake, when someone gasped. I turned and looked. There was the lady of the lake, walking towards us. This is the third time I encountered her on the last safari in Tadoba (2012 trip, 2013 trip, and this trip). Why she doesn’t give darshan during the earlier safaris, only she knows.

For the next 20 minutes or so, she entertained all of us – me, my friend, the other vehicles that came by later. A couple of times she came within 5 feet of me – she was too close for my lens to focus. I just stood quietly, hoping she wouldn’t reach out with a paw or decide to climb up (open top gypsy, I was on the rear seat, and she was walking straight towards me before veering off at the last moment). And I happened to know that she had killed and eaten a human a few months back.

Btw, using flash or making sudden movements – when a dangerous animal such as a tiger or an elephant is close by – is a sure shot way to be featured in the news. “Flashy man gets mauled by a tiger”. One needs to be absolutely still and quiet when they come that close.

The pulse increases when a tiger comes within a few feet. And one gets that thrilling (and addictive) shock during eye contact, especially from a distance of less than 10 feet.

After an extended catwalk session and a dip in the lake, P2 – the tigress – went off into the undergrowth below the Tadoba forest rest house. She was pregnant when I saw her. She would give birth to cubs 4 days later. Unfortunately none of the cubs would survive beyond a few days. But her next litter would, and people from all over India – including me – would be making a beeline towards Tadoba to see Maya’s cubs. But that is another story. 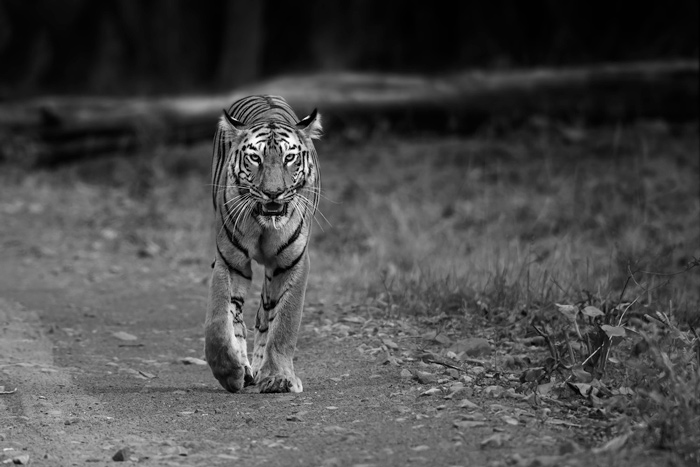 After experiencing Maya, we drove towards Telia lake in Moharli zone. People in Gypsys returning from that zone gave us a thumbs up sign. Apparently Waghdoh – the famous and gigantic male of Tadoba – was taking a nap somewhere near Telia lake. When we reached the lake, we could see Waghdoh resting in a patch of water in the middle of the dried up lake bed. He was far away, and the light was too harsh, but I got a few shots of him as he got up and started walking. We couldn’t stay back because it was time to go.

Went back to the resort feeling happy and content. Took a quick nap – I had a 1150 km drive ahead of me. Said goodbye to my friend, who was catching a flight from Nagpur. The vehicle had been parked out in the sun for more than 2 days. Had to roll down the windows and drive with the AC on for an hour or so. Crossed Chimur, Warora, Wani and Karanji. The return drive, after a week of safaris, is always tiring. I ended up taking an extended nap somewhere near Hyderabad. Kept the engine and ac on, rolled down the windows a little bit, and slept off after dinner. Woke up much refreshed, so the Hyd – Bangalore stretch was a breeze.

Bison – my 4WD Fortuner – performed as expected. Tough and dependable as always.