Kumaon Himalayas: An afternoon among the clouds

Pench – my usual first day destination from Bangalore (it takes me 15-16 hours for 1200+ km) – was hot and humid. The evening was relaxing, given I was staying at a place whose balcony overlooked the jungle. I had no times to do safaris this time, so left the next morning. The roads till Jhansi were fantastic. However, I had to slow down once I crossed into UP. The numbers of cows increased by 10X, and humans by 5X. Got lost trying to take a shortcut near Jhansi. Google Maps led me to a dirt track which eventually became 8 feet wide, and passed through a few villages. When will I ever learn and stop going on detours just because it looks interesting? Got stuck near Gwalior for a few hours, the traffic wasn’t moving. A SNAFU due to road construction, an accident, and a convoy of army trucks passing. All at the same time. This meant that I had to cross the Chambal/Morena stretch after 7 pm. Oh well. A friend had told me to avoid stopping, and not to take panga with local drivers. Followed the second advice, but not the first, when I stopped at a local dhaba. There were some interesting looking guys lounging on charpoys, waiting for mutton (which was getting cooked), and having local beer. Was tempted to join them. Reached Agra late at night, just in time for dinner. Left early next morning, because I wanted to avoid Noida traffic. Yamuna Expressway was a little misty. Had breakfast at Gajraula McDonalds. Decided to take the Kaladhungi – Nainital route via Bazpur. The potholes were only one foot deep. While passing through Kaladhungi, I stopped for a while to breathe the forest air, and to remember the days spent exploring Corbett country on foot during the autumn of 2012.

In Mukteshwar, I went for a long night walk. A guard did warn me that wild animals were common after 8 pm, but I figured that if I made plenty of noise while walking, they would stay away. Spent an hour sitting on a bench, near the little square. There wasn’t a human in sight. The hoarse warning call of a barking deer kept me company. 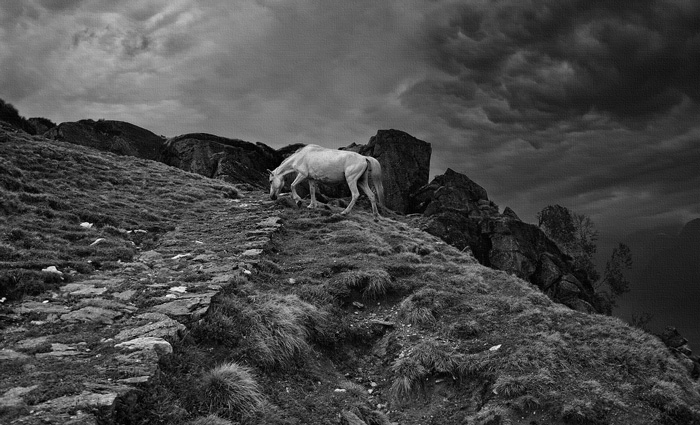 Chaukori was boring, perhaps because I was thinking of the wonderful peak sightings I had had during my previous trip. This time the magnificent peaks were covered with clouds. A nearby secluded resort was more interesting. Days were spent sitting in a pine forest, enjoying the mist and rain, with the cold breeze for company. Evenings were spent in front of a fire. One night (a few hours before and after midnight) was spent in the middle of the forest, 0.5 km from the resort, with just a fire for company. A couple of times animals came up the path, stopped on seeing the fire, and went away. Had checked beforehand that there were no maneating leopards (there was one operating around Thal village, too far away) or cranky bears in that area, so it wasn’t risky. 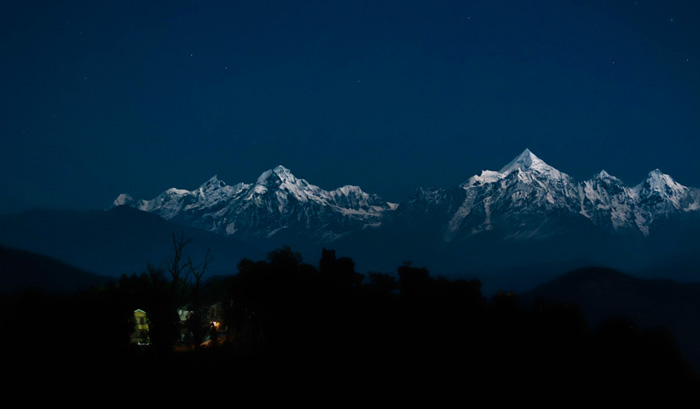 House in the Himalayas

Met a Himalayan Griffon Vulture on the way down from Kalamuni Top. That is the only wildlife photo session I had during this trip. Munsiyari was cold and wet. I could only hope that the weather would improve the next day. 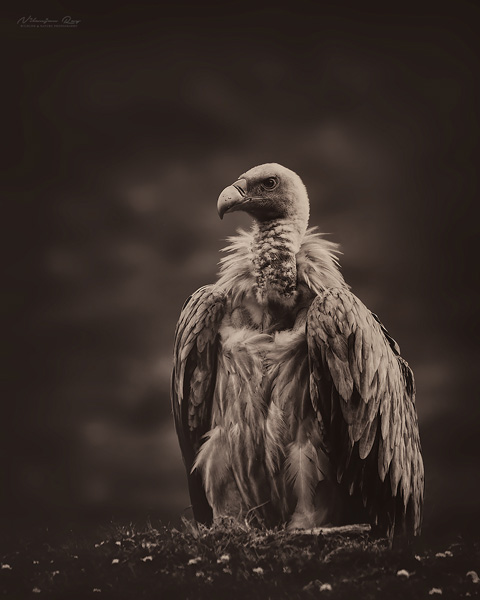 Next morning I started for Khuliya Top. It had been a while since I had carried a backpack on a mountain trail. It started raining. If I kept my warm clothes and rain gear on, I would sweat heavily. If I took them off, I would feel cold and numb after a few minutes. Anyway, clammy and sticky, I reached the half-constructed KMVN property, where a couple of other groups were staying.

After changing clothes, I had a cuppa of chai and saw that the tent was put up properly, without friendly leeches coming inside to meet and greet. Had some food to fortify the inner man. Heard some shouting, and went across to investigate. Leech attack – someone had decided to pitch a tent in the midst of long grass, to the utter delight of the critters. Came back and rechecked the tent interior (I hate creep crawly creatures; snakes are ok; worms and leeches are not ok). Once the drizzle slowed down, I started walking up to the Bugyals with my camera and a couple of light lenses.

At that altitude, there weren’t many trees apart from rhododendrons. Rhododendrons remind me of Sikkim. I have visited Sikkim 10 times, but that was a long time back. A different life. 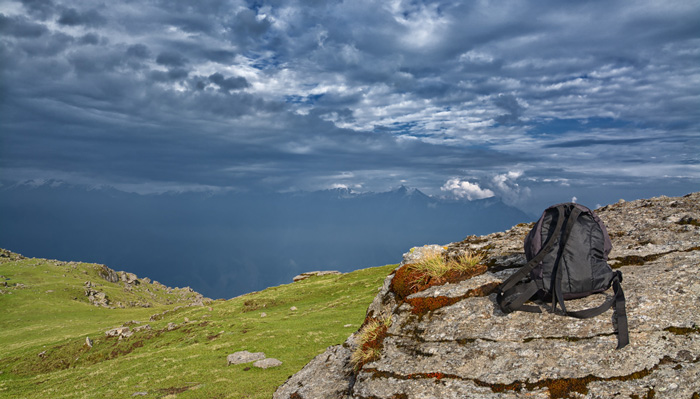 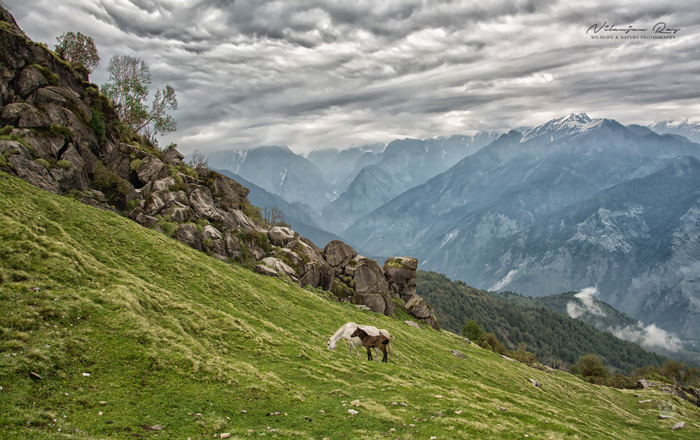 Met a shepherd and his flock after crossing the treeline. The locals climb with a slow but steady step. On and on. Without fatigue.

There were a few horses grazing around. One little fella was rather frisky, he would gallop across the meadow from time to time. A white horse gave me a few photo opportunities, as it stood in front of black rocks.

It had been a few years since I visited Bugyal country. I had forgotten how it felt to sit above the clouds on green grass, and stare as long as sheep or cows.

The shepherd went ahead when I had stopped for 30 minutes to soak in the atmosphere. The sun was about to come out. The cold breeze and the warm sun on my face made for a heady cocktail, as I lay down on the grass and closed my eyes.

I was hoping that the clouds would part before sunset. Seemed my prayers had been answered, since I could see a brief glimpse of Panchachulis behind the clouds. The view started getting better as the afternoon progressed.

All too soon, it was time to go back before it got too dark. As I slowly walked down, I saw Panchachuli 1 emerge like an iceberg above a sea of clouds. And then slowly the entire Panchachuli range became visible. 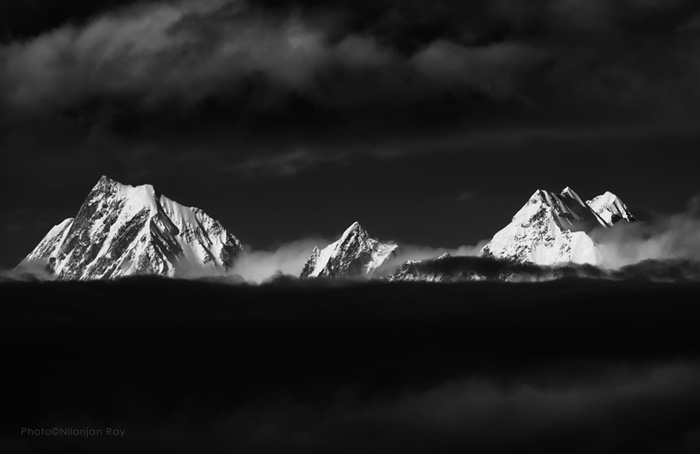 I wanted to be at an appropriate place when the setting sun would light up the top of the peaks. Walked a little faster, and then sat down beside a cliff, waiting for the shadows to deepen and climb up the slope of the mountains. And then the peaks turned pink and orange, while the valleys became dark and blue. As the setting sun caressed the top of the peaks, I changed my camera settings (metering, exposure) and took a few underexposed shots that highlighted the contrast between light and shadow. 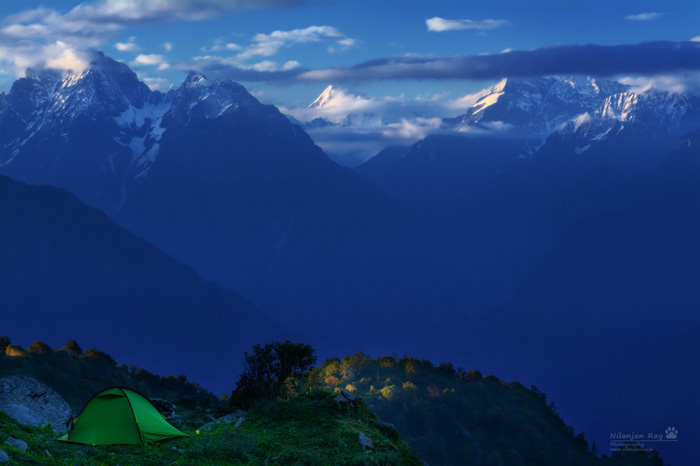 The cold breeze. The thin air. The rapidly dying light. The sun kissing the Panchachulis goodbye. The cry of a raven. It was heaven.

Walked slowly, thoughtfully down to my tent. It was time for a hot tea and a crackling fire.

I didn’t see the snow peaks again after I went down to Munsiyari, but that one magical afternoon (and the next morning) made up for the days of rain and mist. I knew I would be back again, when the peaks would be out in all their splendor during a full moon period. 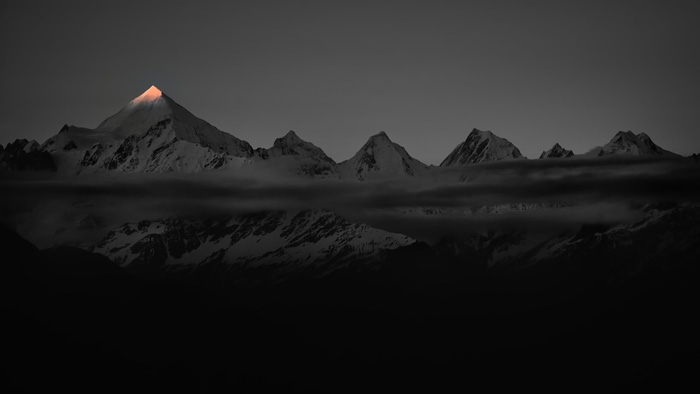